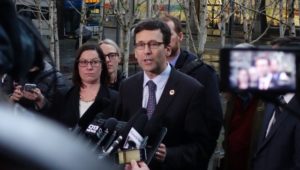 To obtain the Temporary Restraining Order, the state needed to prove that its underlying lawsuit was likely to succeed, that irreparable harm was likely to occur without the restraining order, and that halting the President’s order immediately is in the public interest. The state also needed to establish that the potential injury to Washington residents caused by leaving the President’s order in place outweighs any potential damage from halting it.

Judge Robart, who was nominated to the court by President George W. Bush in 2003, ruled that Ferguson had met the high standards necessary to block the Executive Order until the court reaches the merits of the lawsuit.

“The Constitution prevailed today,” Ferguson said. “No one is above the law — not even the President.”

Washington became the first state to challenge the President’s order on Monday. Ferguson argues that the Executive Order violates the U.S. Constitution’s guarantee of Equal Protection and the First Amendment’s Establishment Clause, infringes individuals’ constitutional right to Due Process and contravenes the federal Immigration and Nationality Act.

Major Washington state institutions supported the Attorney General’s lawsuit through declarations filed alongside the complaint. In their declarations, for example, Amazon and Expedia set forth the detrimental ways the Executive Order impacts their operations and their employees.