New York, NY…The following is from Fox News CEO Suzanne Scott…”Dear colleagues, It is with great sadness and a heavy heart that we share the news this morning regarding our beloved cameraman Pierre Zakrzewski. Pierre was killed in Horenka, outside of Kyiv, Ukraine. Pierre was with Benjamin Hall yesterday newsgathering when their vehicle was struck by incoming fire. 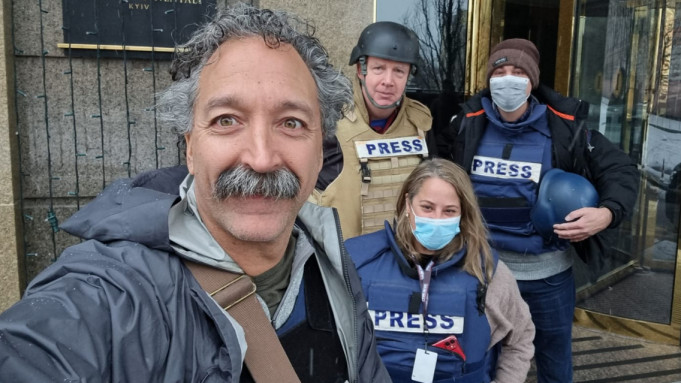 Pierre was a war zone photographer who covered nearly every international story for FOX News from Iraq to Afghanistan to Syria during his long tenure with us. His passion and talent as a journalist were unmatched. Based in London, Pierre had been working in Ukraine since February. His talents were vast and there wasn’t a role that he didn’t jump in to help with in the field – from photographer to engineer to editor to producer – and he did it all under immense pressure among journalists at every media outlet. He was wildly popular – everyone in the media industry who has covered a foreign story knew and respected Pierre.

Last year, he played a key role in getting our Afghan freelance associates and their families out of the country after the U.S. withdrawal. In December at our annual employee Spotlight Awards, Pierre was given the “Unsung Hero” award in recognition of his invaluable work.

Jay Wallace said it best this morning – “Pierre was a constant in all of our international coverage. I, like countless others, always felt an extra sense of reassurance when arriving on the scene and seeing him with a camera in hand. The legacy of his positive spirit, bondless energy and eye for the story will carry on.”

We extend our deepest condolences to Pierre’s wife Michelle and family – please keep them in all your prayers. And please continue to pray for Benjamin Hall, who remains hospitalized in Ukraine. We will continue to be in touch with any further updates as needed.

Today is a heartbreaking day for FOX News Media and for all journalists risking their lives to deliver the news. I leave you with pictures of Pierre in the field doing what he loved.