Minneapolis, MN….Walter Frederick “Fritz” Mondale (January 5, 1928 – April 19, 2021.  The following is a statement from his family.  “It is with profound sadness that we share news that our beloved dad passed away today in Minneapolis, Minnesota.  As proud as we were of him leading the presidential ticket for Democrats in 1984, we know that our father’s public policy legacy is so much more than that.  The Fair Housing Act of 1968 was one of his proudest – and hardest fought – achievements.  In the course of his years in the U.S. Senate, he understood the sense of reckoning that this country then faced, and was committed to that work alongside Hubert Humphrey, Josie Johnson, Roy Wilkins and so many others.  We are grateful that he had the opportunity to see the emergence of another generation of civil rights reckoning in the past months. 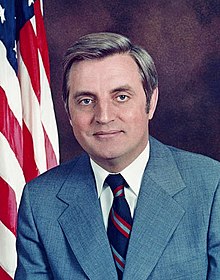 It is also poignant that his other area of major policy focus was the environment, as the world’s grappling with climate change enters a new generation of critical work.  Passage of the Wild & Scenic Rivers Act was another hard-fought accomplishment in his long career.

He was honored to serve as Minnesota’s Attorney General, as United States Senator from Minnesota, as U.S. Ambassador to Japan; his greatest honor and privilege, of course, was serving as Vice President of the United States under President Jimmy Carter.

Beyond his commitment to public service, our dad was committed to our family, and we will miss him more than words can capture.  He was preceded in death by our sister, Eleanor, and our mother. He is survived by sons Ted and William; grandchildren Louis, Amanda, Berit and Charlotte Mondale, and Cassandra and Danielle Miller; daughter-in-law Rebecca Mondale and son-in-law Chan Poling.

We also want to express our deep gratitude to all the people who worked on his staff in each public office and who maintained active connections with him in the years since.  Finally, deep appreciation to Lynda Pedersen, his long-standing executive assistant at the Dorsey Law firm and to Patti Schwartz, his primary homecare provider since the passing of our mother, Joan, in 2014.”