Washington, DC…Total nonfarm payroll employment rose by 467,000 in January, and the unemployment rate was little changed at 4.0 percent, the U.S. Bureau of Labor Statistics reported today. Employment growth continued in leisure and hospitality, in professional and business services, in retail trade, and in transportation and warehousing. 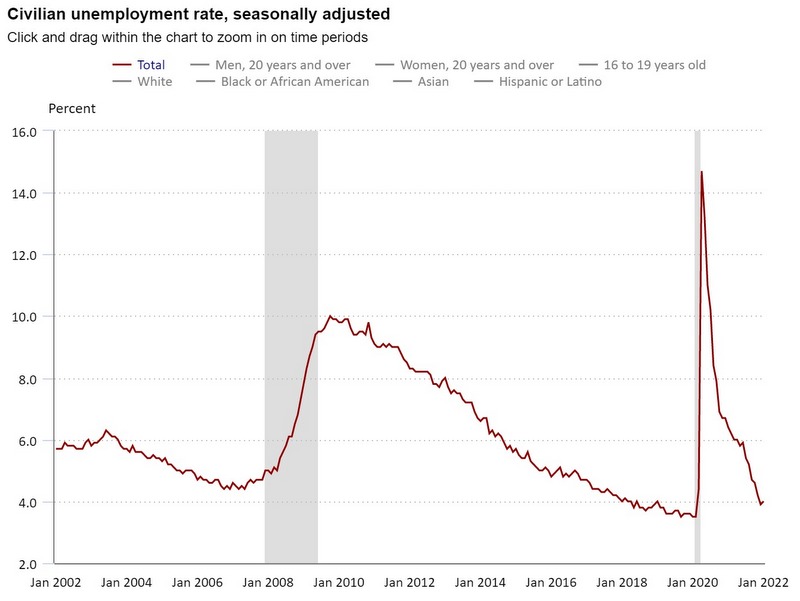 This news release presents statistics from two monthly surveys. The household survey
measures labor force status, including unemployment, by demographic characteristics.
The establishment survey measures nonfarm employment, hours, and earnings by industry.
For more information about the concepts and statistical methodology used in these two
surveys, see the Technical Note.

Among the unemployed, the number of job leavers increased to 952,000 in January, following
a decrease in the prior month. The number of persons on temporary layoff, at 959,000 in
January, also increased over the month but is down by 1.8 million over the year. The
number of permanent job losers, at 1.6 million, changed little in January but is down
by 1.9 million from a year earlier. (See table A-11.)

In January, the number of persons jobless less than 5 weeks increased to 2.4 million
and accounted for 37.0 percent of the total unemployed. The number of long-term unemployed
(those jobless for 27 weeks or more) declined to 1.7 million. This measure is down from
4.0 million a year earlier but is 570,000 higher than in February 2020. The long-term
unemployed accounted for 25.9 percent of the total unemployed in January. (See table A-12.)

After accounting for the annual adjustments to the population controls, the labor force
participation rate held at 62.2 percent in January, and the employment-population ratio
was little changed at 59.7 percent. Both measures are up over the year but remain below
their February 2020 levels (63.4 percent and 61.2 percent, respectively). (See table A-1.
For additional information about the effects of the population adjustments, see table C.)

The number of persons employed part time for economic reasons, at 3.7 million, continued
to trend down over the month. The over-the-year decline of 2.2 million brings this measure
to 673,000 below its February 2020 level. These individuals, who would have preferred
full-time employment, were working part time because their hours had been reduced or they
were unable to find full-time jobs. (See table A-8.)

The number of persons not in the labor force who currently want a job was little changed
at 5.7 million in January. This measure decreased by 1.3 million over the year but is
708,000 higher than in February 2020. These individuals were not counted as unemployed
because they were not actively looking for work during the 4 weeks preceding the survey
or were unavailable to take a job. (See table A-1.)

Among those not in the labor force who wanted a job, the number of persons marginally
attached to the labor force, at 1.5 million, changed little in January. These individuals
wanted and were available for work and had looked for a job sometime in the prior 12
months but had not looked for work in the 4 weeks preceding the survey. The number of
discouraged workers, a subset of the marginally attached who believed that no jobs were
available for them, was also little changed over the month, at 408,000. (See Summary
table A.)

In January, 6.0 million persons reported that they had been unable to work because their
employer closed or lost business due to the pandemic–that is, they did not work at all
or worked fewer hours at some point in the 4 weeks preceding the survey due to the
pandemic. This measure is considerably higher than the level of 3.1 million in December.
Among those who reported in January that they were unable to work because of pandemic-
related closures or lost business, 23.7 percent received at least some pay from their
employer for the hours not worked, up from the prior month.

Among those not in the labor force in January, 1.8 million persons were prevented from
looking for work due to the pandemic, up from 1.1 million in the prior month. (To be
counted as unemployed, by definition, individuals must be either actively looking for
work or on temporary layoff.)

These supplemental data come from questions added to the household survey beginning in
May 2020 to help gauge the effects of the pandemic on the labor market. The data are
not seasonally adjusted. Tables with estimates from the supplemental questions for all
months are available online at
www.bls.gov/cps/effects-of-the-coronavirus-covid-19-pandemic.htm.

Total nonfarm payroll employment increased by 467,000 in January, compared with an
average monthly gain of 555,000 in 2021. Nonfarm employment has increased by 19.1
million since April 2020 but is down by 2.9 million, or 1.9 percent, from its pre-
pandemic level in February 2020. In January, employment growth continued in leisure
and hospitality, in professional and business services, in retail trade, and in
transportation and warehousing. (See table B-1. See the note at the end of this news
release and table A for information about the annual benchmark process.)

In accordance with usual practice, the seasonal adjustment models are updated as part
of the annual benchmark process. As a result of the updates, there were some large
revisions to seasonally adjusted data that mostly offset each other. (See the note at
the end of this news release and table A for information about the revisions, the
annual benchmark process, and the seasonal adjustment model updates.)

In accordance with annual practice, the establishment survey data released today
have been benchmarked to reflect comprehensive counts of payroll jobs for March
2021. These counts are derived principally from the Quarterly Census of Employment
and Wages (QCEW), which counts jobs covered by the Unemployment Insurance (UI) tax
system. The benchmark process results in revisions to not seasonally adjusted data
from April 2020 forward. Seasonally adjusted data from January 2017 forward are
subject to revision. In addition, data for some series prior to 2017, both
seasonally adjusted and unadjusted, incorporate other revisions.

As part of the benchmark process, the seasonal adjustment models are also updated.
These models remove normal seasonal fluctuations–such as regular employment
changes due to major holidays–from the data series, making it easier to observe
cyclical and other economic trends. Now that there are more monthly observations
related to the historically large job losses and gains seen in the pandemic-driven
recession and recovery, the models can better distinguish normal seasonal movements
from underlying trends. As a result, some large revisions to seasonally adjusted
data occurred with the updated models; however, these monthly changes mostly offset
each other. For example, the over-the-month employment change for November and December
2021 combined is 709,000 higher than previously reported, while the over-the-month
employment change for June and July 2021 combined is 807,000 lower. Overall, the
2021 over-the-year change is 217,000 higher than previously reported. Going forward,
the updated models should produce more reliable estimates of seasonal movements.
Table A presents revised total nonfarm employment data on a seasonally adjusted
basis from January to December 2021.

All revised historical establishment survey data are available on the BLS website
at www.bls.gov/ces/data/home.htm. In addition, an article that discusses the benchmark
and post-benchmark revisions and other technical issues is available at
www.bls.gov/web/empsit/cesbmart.htm.

Adjustments to Population Estimates for the Household Survey

Effective with data for January 2022, updated population estimates were incorporated into
the household survey. Population estimates for the household survey are developed by the
U.S. Census Bureau. Each year, the Census Bureau updates the estimates to reflect new
information and assumptions about the growth of the population since the previous decennial
census. The change in population reflected in the new estimates results from the introduction
of a blended 2020 population base, which combines population totals from the 2020 Census
and demographic characteristics from other sources. It also reflects adjustments for net
international migration, updated vital statistics, and estimation methodology improvements.
The vast majority of the population change, however, is due to the change in the base
population from Census 2010 to the blended Census 2020 base.

In accordance with usual practice, BLS will not revise the official household survey estimates
for December 2021 and earlier months. To show the impact of the population adjustments,
however, differences in selected December 2021 labor force series based on the old and new
population estimates are shown in table B.

The adjustments increased the estimated size of the civilian noninstitutional population in
December by 973,000, the civilian labor force by 1,530,000, employment by 1,471,000, and
unemployment by 59,000. The number of persons not in the labor force decreased by 557,000.
Although the total unemployment rate was unaffected, the employment-population ratio and
labor force participation rate were each increased by 0.3 percentage point. This was mostly
due to an increase in the size of the population in age groups that participate in the labor
force at high rates (those ages 35 to 64) and a large decrease in the size of the population
age 65 and older, which participates at a low rate.

Data users are cautioned that these annual population adjustments can affect the comparability
of household data series over time. Table C shows the effect of the introduction of new
population estimates on the comparison of selected labor force measures between December
2021 and January 2022. Additional information on the population adjustments and their effect
on national labor force estimates is available at
www.bls.gov/web/empsit/cps-pop-control-adjustments.pdf.