Washington, DC…The first few pages of Chief Justice Roberts Opinion follows and click on the image below for complete ruling. “Catholic Social Services is a foster care agency in Philadelphia. The City stopped referring children to CSS upon discovering that the agency would not certify same-sex couples to be foster parents due to its religious beliefs about marriage. The City will renew its foster care contract with CSS only if the agency agrees to certify same-sex couples.The question presented is whether the actions of Philadelphia violate the First Amendment. 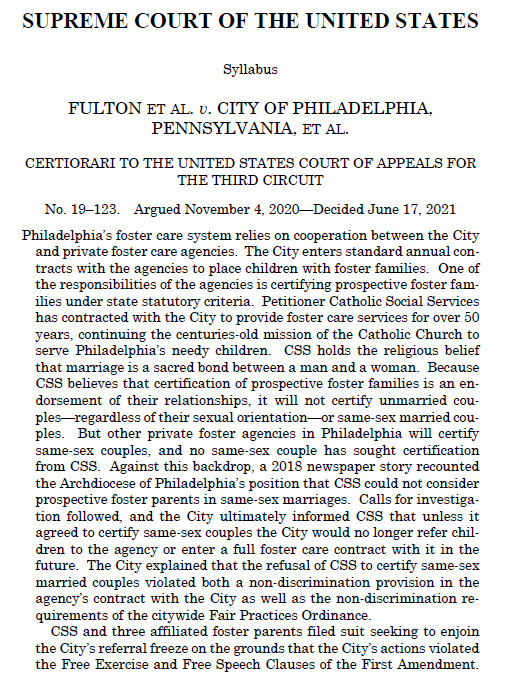 I The Catholic Church has served the needy children of Philadelphia for over two centuries. In 1798, a priest in the City organized an association to care for orphans whose parents had died in a yellow fever epidemic. H. Folks, The Care of Destitute, Neglected, and Delinquent Children 10(1902). During the 19th century, nuns ran asylums for orphaned and destitute youth. T. Hacsi, Second Home: Orphan Asylums and Poor Families in America 24 (1997).When criticism of asylums mounted in the Progressive Era, see id., at 37–40, the Church established the Catholic

Children’s Bureau to place children in foster homes. Petitioner CSS continues that mission today.
The Philadelphia foster care system depends on cooperation between the City and private foster agencies like CSS.When children cannot remain in their homes, the City’s Department of Human Services assumes custody of them. The Department enters standard annual contracts with private foster agencies to place some of those children with foster families.

The placement process begins with review of prospective foster families. Pennsylvania law gives the authority to certify foster families to state-licensed foster agencies like CSS. 55 Pa. Code §3700.61 (2020). Before certifying a family, an agency must conduct a home study during which it considers statutory criteria including the family’s “ability to provide care, nurturing and supervision to children,” “[e]xisting family relationships,” and ability “to work in partnership” with a foster agency. §3700.64. The agency must decide whether to “approve, disapprove or provisionally approve the foster family.” §3700.69.

When the Department seeks to place a child with a foster family, it sends its contracted agencies a request, known as a referral. The agencies report whether any of their certified families are available, and the Department places thechild with what it regards as the most suitable family. The agency continues to support the family throughout the placement.

The religious views of CSS inform its work in this system. CSS believes that “marriage is a sacred bond between a man and a woman.” App. 171. Because the agency understands the certification of prospective foster families to be an endorsement of their relationships, it will not certify unmarried couples—regardless of their sexual orientation—orsame-sex married couples. CSS does not object to certifying gay or lesbian individuals as single foster parents or to placing gay and lesbian children. No same-sex couple has ever sought certification from CSS. If one did, CSS would direct the couple to one of the more than 20 other agencies in the City, all of which currently certify same-sex couples. For over 50 years, CSS successfully contracted with the City to provide foster care services while holding to these beliefs.

But things changed in 2018. After receiving a complaint about a different agency, a newspaper ran a story in which a spokesman for the Archdiocese of Philadelphia stated that CSS would not be able to consider prospective foster parents in same-sex marriages. The City Council called for an investigation, saying that the City had “laws in place to protect its people from discrimination that occurs under the guise of religious freedom.” App. to Pet. for Cert. 147a. The Philadelphia Commission on Human Relations launched an inquiry. And the Commissioner of the Department of Human Services held a meeting with the leadership of CSS.She remarked that “things have changed since 100 years ago,” and “it would be great if we followed the teachings of Pope Francis, the voice of the Catholic Church.” App. 366.Immediately after the meeting, the Department informed CSS that it would no longer refer children to the agency. The City later explained that the refusal of CSS to certify same-sex couples violated a non-discrimination provision in its contract with the City as well as the non-discrimination requirements of the citywide Fair Practices Ordinance. The City stated that it would not enter a full foster care contract with CSS in the future unless the agency agreed to certify same-sex couples.

CSS and three foster parents affiliated with the agency filed suit against the City, the Department, and the Commission. The Support Center for Child Advocates and Philadelphia Family Pride intervened as defendants. As relevant here, CSS alleged that the referral freeze violated the Free Exercise and Free Speech Clauses of the First Amendment. CSS sought a temporary restraining order and preliminary injunction directing the Department to continue
referring children to CSS without requiring the agency to certify same-sex couples.

The District Court denied preliminary relief. It concluded that the contractual non-discrimination requirement and the Fair Practices Ordinance were neutral and generally applicable under Employment Division, Department of Human Resources of Oregon v. Smith, 494 U. S. 872 (1990), and that the free exercise claim was therefore unlikely to succeed. 320 F. Supp. 3d 661, 680–690 (ED Pa. 2018). The court also determined that the free speech claims were unlikely to succeed because CSS performed certifications as part of a government program. Id., at 695–700.
The Court of Appeals for the Third Circuit affirmed. Because the contract between the parties had expired, the court focused on whether the City could insist on the inclusion of new language forbidding discrimination on the basis of sexual orientation as a condition of contract renewal.

CSS and the foster parents sought review. They challenged the Third Circuit’s determination that the City’s actions were permissible under Smith and also asked this Court to reconsider that precedent.
We granted certiorari. 589 U. S. ___ (2020).

A Win for Religious Liberty in 9-0 Fulton v. Philadelphia Supreme Court Decision added by admin on June 17, 2021
View all posts by admin →