A Proclamation on Days of Remembrance of Victims of the Holocaust, 2021

Washington, DC…On Yom HaShoah — Holocaust Remembrance Day — we stand in solidarity with the Jewish people in America, Israel, and around the world to remember and reflect on the horrors of the Holocaust. An estimated six million Jews perished alongside millions of other innocent victims — Roma and Sinti, Slavs, disabled persons, LGBTQ+ individuals, and others — systematically murdered by the Nazis and their collaborators in one of the cruelest and most heinous campaigns in human history. 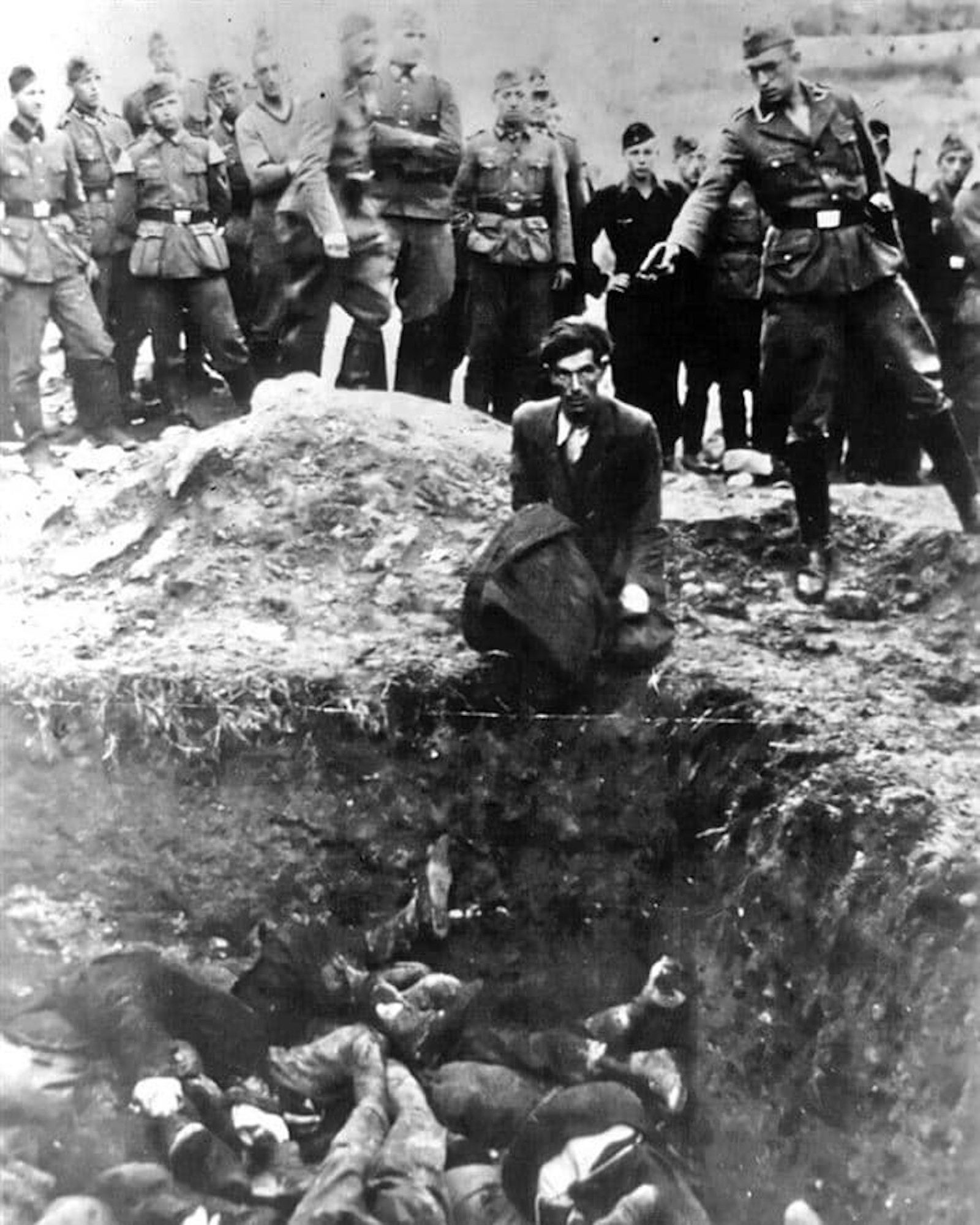 (Editor’s Note: On the back of the photo above was written “The Last Jew in Vinnitsa”  If you want to force yourself to study what humans are truly capable of doing to other humans when they have been scapegoated study the Einsatzgruppen.  The SS Death squads that followed the German Army after Operation Barbarossa.  Millions of Jews and others were at times forced to dig their own graves, told to strip, many women holding children, waiting in line to be killed.  Those awaiting death were even forced to position themselves to fall after they had been shot to maximize the number of corpses that could fit in a pit. On September 29–30, 1941 33,771 Jews in Babi Yar were killed in this manor. The phycological horror in addition to their actual death for these victims is unimaginable.”  The actions of the Einsatzgruppen and personal nature of their killings were so horrific that if possible makes the inhumanities of gas chambers and death camps almost benign in comparison.)

We honor the memories of precious lives lost, contemplate the incomprehensible wound to our humanity, mourn for the communities broken and scattered, and embrace those who survived the Holocaust — some of whom are still with us today, continuing to embody extraordinary resilience after all these years. Having borne witness to the depths of evil, these survivors remind us of the vital refrain: “never again.” The history of the Holocaust is forever seared into the history of humankind, and it is the shared responsibility of all people to ensure that the horrors of the Shoah can never be erased from our collective memory.

It is painful to remember. It is human nature to want to leave the past behind. But in order to prevent a tragedy like the Holocaust from happening again, we must share the truth of this dark period with each new generation. All of us must understand the depravity that is possible when governments back policies fueled by hatred, when we dehumanize groups of people, and when ordinary people decide that it is easier to look away or go along than to speak out. Our children and grandchildren must learn where those roads lead, so that the commitment of “never again” lives strongly in their hearts.

I remember learning about the horrors of the Holocaust from my father when I was growing up, and I have sought to impart that history to my own children and grandchildren in turn. I have taken them on separate visits to Dachau, so that they could see for themselves what happened there, and to impress on them the urgency to speak out whenever they witness anti-Semitism or any form of ethnic and religious hatred, racism, homophobia, or xenophobia. The legacy of the Holocaust must always remind us that silence in the face of such bigotry is complicity — remembering, as Rabbi Abraham Joshua Heschel wrote, that there are moments when “indifference to evil is worse than evil itself.”

Those who survived the Holocaust are an inspiration to every single one of us. Yet they continue to live with the unique mental and physical scars from the unconscionable trauma of the Holocaust, with many survivors in the United States living in poverty. When I served as Vice President, I helped secure Federal funding for grants to support Holocaust survivors — but we must do more to pursue justice and dignity for survivors and their heirs. We have a moral imperative to recognize the pain survivors carry, support them, and ensure that their memories and experiences of the Holocaust are neither denied nor distorted, and that the lessons for all humanity are never forgotten.

Holocaust survivors and their descendants — and each child, grandchild, and great-grandchild of those who lost their lives — are living proof that love and hope will always triumph over murder and destruction. Every child and grandchild of a survivor is a testament to resilience, and a living rebuke to those who sought to extinguish the future of the Jewish people and others who were targeted.

Yom HaShoah reminds us not only of the Jewish victims of the Holocaust, but also reinforces our ongoing duty to counter all forms of dehumanizing bigotry directed against the LGBTQ+, disability, and other marginalized communities. While hate may never be permanently defeated, it must always be confronted and condemned. When we recognize the fundamental human dignity of all people, we help to build a more just and peaceful world. In the memory of all those who were lost, and in honor of all those who survived, we must continue to work toward a better, freer, and more just future for all humankind.

IN WITNESS WHEREOF, I have hereunto set my hand this second day of April, two thousand twenty-one, and of the Independence of the United States of America the two hundred and forty-fifth.

A Proclamation on Days of Remembrance of Victims of the Holocaust, 2021 added by admin on April 5, 2021
View all posts by admin →